"And we know that in all things God works for the good of those who love him, who have been called according to his purpose."
- Romans 8:28 NIV

The past few months in ministry have just been one long testament to the faithfulness of God. I already told you guys just how much God provided in our season of financial support-raising this summer, and he hasn't stopped providing just because that season is behind us. Going into this school year, there was understandable trepidation among some of our students and staff concerning what ministry would look like in the midst of a pandemic. After all, how could we meet students to invest in this year if our campuses are neither hosting welcome week events nor allowing us to host our own? I am so excited to tell you that despite this obstacles, our year has been off to a great start!

Like I said, UTA didn't allow us to gather in large groups, so we had to get creative with how to meet students. Over the first two weeks of school, our student leaders and staff split into small groups and went to various areas on campus with frisbees, balls, cards, and board games to invite passersby if they wanted to join. And join they did! Because friendship has been so hard to come by in the age of social distancing, students have been hungry to connect with anyone who would invite them to connect, whether or not they have a Christian background, and so in some ways, God has used social distancing to make even more students open to Christian community than otherwise would be! As a result, many of our student leaders have hit the ten-student maximum capacity on their small groups and are trying to figure out how to accommodate people who are eager for friendship and eager to learn about Jesus. What a cool problem to have :)

This year, since social distancing regulations have prevented us from meeting for Thursday Night Fellowship and worshipping together, we've decided to stream an extended teaching every week that we are calling Deep Dive, and it has been so cool! We decided to teach through the book of Mark and students have been loving it. My friend and co-minister, Austin, has been taking us through the first couple of chapters and if you have the time, I'd invite you to give it a listen. I hope it encourages and challenges you as it has me and our students.

I'd like to leave you with some encouraging stories from our staff and student leaders that I think illustrate well just how clearly God has been moving during these first few weeks of school!
"So I met a girl while [a student leader] and I were passing out water bottles Sunday morning on campus. We told her that if she wanted to make some new friends she could join us later that night for some socially distanced games. She ended up sitting down at a bench next to us and talked to us the entire time we were handing out the water. She shared a lot about herself and how, even though she’s a junior, she hadn’t experienced friendship on campus before. She even asked, 'is it sad that I’m a junior and I haven’t made any friends yet?' She has been coming to our hangouts every night and says this is the most she’s gone to events since she started college. She’s even watching the stream tonight, which is super cool given she doesn’t have a Christian background (she grew up Jewish). Anyways, God is so good and doing some great things in people’s lives, and I’m so thankful He has given us the ability to care for those who are lonely and need friends!"
"I was just sitting on a bench by a campus map with the strategy of meeting people looking for instructions, but also just talking to God and telling him how I'm discouraged by my lack of belief in the strategies I have available to me. I was asking God for a lot of his help, and specifically for some sort of divine appointment. As soon as I finished praying, two dudes asked me if I knew where the library was. I walked with them for a bit and found out that they're both transfer students from Waxahachie that are new to UTA and that they were actively involved in a ministry there. They wanted to join a ministry here and were looking to try to get a game of ultimate frisbee going tonight with people they were trying to meet. God is good."
"I had a really neat convo with a girl last night who sort of happened upon one of our 'informal hangs.' She was very candid with me about wanting friends and struggling with mental health. She said she planned on joining a sorority because that’s the only way she knew she could make friends. But then she asked what I was a part of and said it never occurred to her to join anything religious to make friends. She said that she didn’t grow up in church but in light of depression and anxiety she experienced for the first time a few months ago, she has been contemplating spirituality and her purpose. I hope she will decide to get connected!"
THANK YOU for making it possible for us to be on campus ready to respond when God shows up as he has!!
With love and gratitude,
Jalen 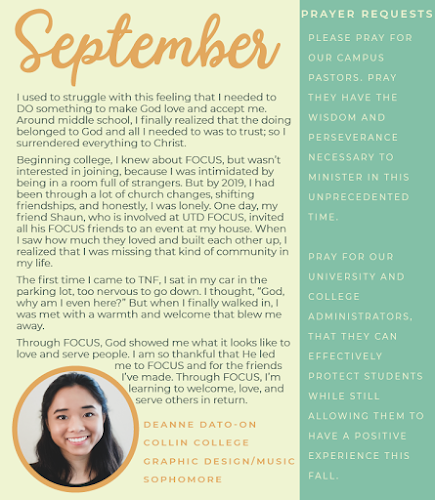 Posted by Jalen Quintana at 1:57 PM