Wow I have so much to tell you guys in so little space! God has absolutely blown my mind this month and I can't wait to tell you about it.

To start off, I'd like to tell you about two places where I've seen hearts turned to God in crazy ways this month, one at UTA and one at DBU. So the first involves my friend Konner (below). This man has an accent that would make you think he's from Brooklyn despite being from Louisiana and his name is uncommonly spelled, but those are by no means the craziest things about him! Konner has been going to a core (small group) led by two of the students I've been mentoring this year and let me tell you -- God is changing his life!! 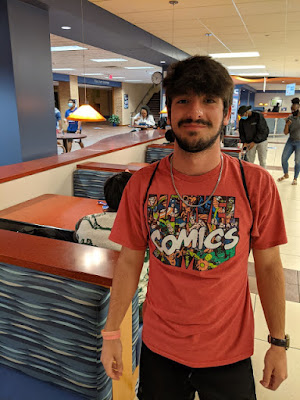 It feels like just yesterday that school was starting and I saw him sitting by himself on campus so I invited him to toss a frisbee with me and some of our student leaders. It also feels like just yesterday that Konner came to my house to play ping pong with my roommate and I overheard their conversation in which Konner said (like a miniature Robert De Niro) "I like you guys but this whole religion thing just ain't for me. It just don't make no sense." My roommate (who has been growing a ton as a disciple in his own right) responded by acknowledging that asking questions is a good thing and that he wanted to be his friend regardless fo where he stood with God.

Over the course of the past few months Konner has been consistent to core, our Thursday night Deep Dives into the book of Mark, his 1-1 study with his core facilitator, and has been enjoying the freedom to ask questions and be loved by Jesus' people the entire time. He's also gotten plugged into a few other ministries on campus and has even gotten to the point where he: believes Jesus is God, wants to go home to Louisiana over Thanksgiving break and give a testimony at his church about how Jesus has changed his life, and wants to take some time with his friends back home (whom he convinced of atheism in high school) and share with them too about what Jesus has done. I am literally speechless every time I think about the transformation Konner has experienced in just a few short months. Please join me in praying that this transformation leads to a life of serious discipleship. 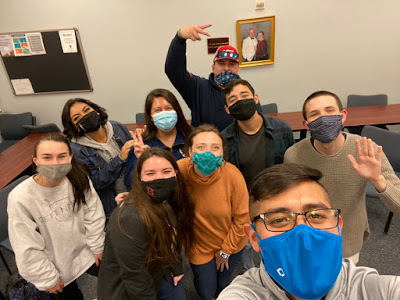 Next story is from DBU. Our DBU core (part of which is pictured above) has been such an encouragement this year, especially because despite going to a Christian university, some of our students are experiencing authentic Christian community for the first time. One of our girls recently opened up in core about this being her main group of friends on or off campus, about how much she's grown to trust Christians since coming to core, and how she's starting to make decisions based on what me and my co-minister, Emily, suggest to her Jesus might have her do. She also opened up to me and Emily recently about some struggles she has feared to bring before Christian leaders and told us her mom calls us her "brother" and "sister" in her native tongue.
It's crazy to me how much God has used his servants to point people's hearts toward him in just a few short months, especially considering the threat we thought COVID might pose to ministry at the outset of the year. It's insane what he's capable of! 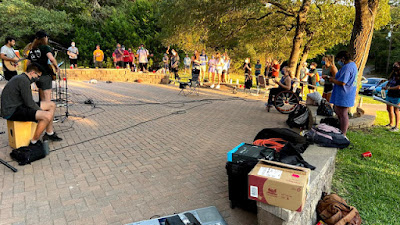 Next, I need to tell you about Fall Park Day! Due to COVID we had to cancel our annual Fall Camp, which was a bummer because Fall Camp is usually a place where a lot of students who are on the fringes of our community or are not sure about investigating Jesus really buy in for the first time. To make up for this, we decided to have a day at the park to give our students some sort of opportunity to bond and minister to each other, even if it wasn't quite the same. But I'm amazed what God was still able to do with a much shorter event! When I got back from camp I heard story after story of how much students wanted to be part of our community and learn more about Jesus. 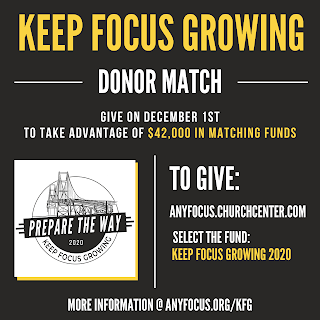 The last thing I want to tell you about is Keep FOCUS Growing, or KFG. KFG is our annual fundraising campaign where we raise the majority of our funds to cover our expenses other than staff salaries, like camp scholarships for students, sound equipment for our large group gatherings, etc. I would like to ask you to consider giving, and here's why: on December 1 we have a team of generous supporters who have pledged to donate up to $42,000 to match whatever we are able to raise elsewhere. That means every dollar you give on December 1 will magically turn into TWO dollars that will go directly to making and maturing disciples on campus. What a steal of a deal worthy of prayerful consideration. 😉
Thank you for reading this longer blog post. I hope you're as encouraged as I am by God's crazy work on these campuses. And THANK YOU for making my participation in these students' stories possible through your generous donations.
With love and gratitude,
Jalen 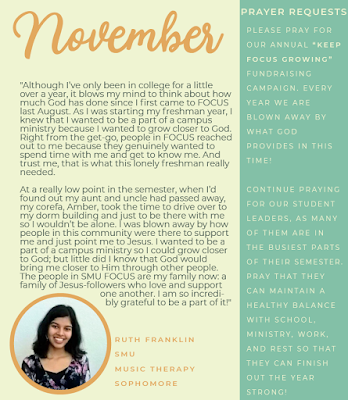 Posted by Jalen Quintana at 5:59 PM